Last year, I wrote an article detailing a method to predict season results with “win shares”. As we rapidly approach the 2021 college football season, there will be plenty of season predictions and discussion in the near future—especially from this website. Win shares are a more “fun” way to gauge your team’s chances, and for Tennessee football, the first year of the Josh Heupel era is a true unknown.

Essentially, instead of giving a straight win/loss prediction, you try and quantify the team’s chances in a game. So you’re not just choosing 100% win or 100% loss—you’re putting a more accurate gauge on how each opponent lines up against yours. If you think Tennessee will be a favorite against Kentucky, but not an overwhelming one, you might put the win probability at 65%, which translates to .65 win shares.

What does that look like for Tennessee in 2021? You can do this with a pen and paper in your own home, and I’ve posted below my own personal assessments of the games for 2021.

Most Tennessee fans have completely reset their expectations for 2021. 4-8 and 5-7 are the most common predictions. A lucky break or two, and Tennessee is back to a bowl game. That’s a small consolation prize for what fans have had to endure, but it would be a pretty good first season from Heupel.

The good news with Tennessee’s schedule is this: They have three “gimme” games, where even the most negative Volunteer fan thinks they will win. Bowling Green, Tennessee Tech, and South Alabama are layups. That word might trigger Tennessee fans who witnessed the loss to Georgia State, but that loss was shocking for the exact reason stated: It’s super rare. A vast majority of the “gimme” games for Power-5 opponents end up with the home team winning.

Then, they also get Vanderbilt in Neyland, which most believe they’ll be favored in. That’s four wins right there.

Georgia is likely an automatic loss. Beyond that are two games the Volunteers will not be favored in: Ole Miss and Pittsburgh. They are not guaranteed losses, but both teams are expected to be significantly better than Tennessee.

The away schedule is…not kind to the Volunteers. There’s likely no games where Tennessee is favored, and there’s two matchups where they are heavy underdogs. If I had to guess, Kentucky will likely be Tennessee’s best chance at pulling off a road win. The Wildcats have a lot to replace, and they have had major staff turnover.

We can also convert the game spreads to probabilities thanks to this website. The spreads for Tennessee’s 2021 season were just released, and Terry Lambert looked at them a bit more in his own article. This year, there is a noticeable difference between my predictions and the spread conversions.

I have to say: I am shocked. The odds given for Tennessee are much better than most expected. In fact, they seem to be higher on the Volunteers than a majority of Tennessee fans. Vegas views Pittsburgh and Ole Miss as near tossups, while giving Tennessee a clear advantage over South Carolina. That’s probably where the stark difference comes in, since I have South Carolina as a tossup and Tennessee as an underdog in the former two games. The difference between a 95% chance and 100% chance also makes an impact in the final tabulations.

Now, it’s your turn. Test out this method and see what number you come up with!

We will have a different predictions piece up soon, where we detail how we think the team will look, and where our gut feelings are pointing us.

Sat Sep 4 , 2021
The Miami Dolphins had been off Friday as they commenced a three-working day break just before they begin entire-on preparations for their Week 1 matchup in opposition to the New England Patriots. But the staff continue to was lively in generating moves, precisely as it pertains to the follow squad. […] 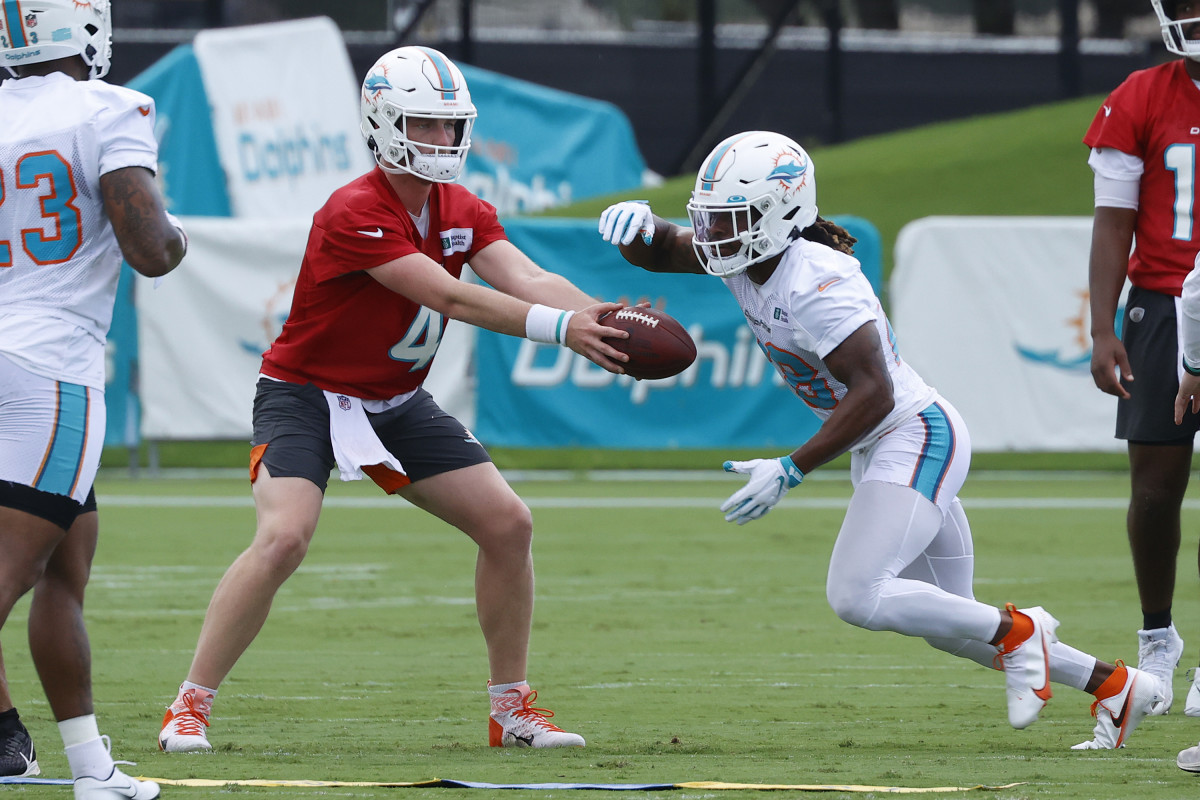